Marionette is a graphical programming language for Vectorworks. It allows the user to generate and manipulate VW objects without learning a traditional text based language. A "Script" or "Program" in Marionette is called a "Network" and resembles a flow-chart. A network is a collection of "Nodes" each of which represents a function or mapping from inputs to outputs. Data travels from left to right in wires between nodes, possibly generating VW drawing or BIM objects in the process.

A series of tutorials on the basics of Marionette can be found here.

What is a Node

A node is a single piece of the marionette network. It defines how the data will be transferred from the input ports on the left to the output ports on the right of the node.

This is a simple Marionette Node that adds two input numbers and outputs the result:

Nodes might have many or no input and output ports.

Nodes can also have Object Info Palette - Shape Pane (OIP) controls when data is required from the user.

This is an example of a simple node that has no input ports. It represents an integer value which is set in the OIP and sent downstream through the single output port:

And this node only has an input port and then will present a dialog with showing it's value:

What is a Network

A network is a set of Marionette Nodes connected to each other to define the flow of data. The data flow is defined by the wires that connect the input and output ports.

The data type that flows on a wire from an output to an input port and is determined by the output. The data might be a single value or a list of values.

This is a graphical demonstration of a simple value data flow:

The numbers in red represent the actual values that run through the wires.

In this case, each wire transfers only one value from the output ports to the input: 1 + 2 = 3

The wires might carry several data values. In this case the node will be repeated for each value on the wire

There are four values on the input wire. This means the the node will be executed for each single value to produce a single result. The result of each iteration will be collected in a list and passed as an output.

In this case the node will calculate the power of 2 of the value and set it as a result. The result will also be composed of four values:

There might be several wires coming into a single input port.

The mixing will be performed when at least one input is a list of values. Then all inputs will be converted to lists of the same size, where the last element of the short lists will be repeated to match the length of the longest.

In the case above, the 'Add' node will be repeated twice:

You can imagine a more complex case: 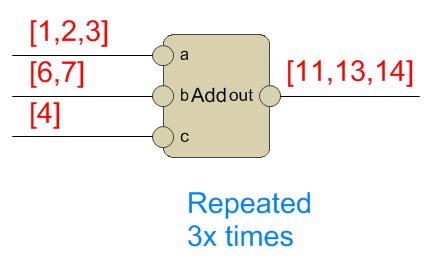 Then after mixing, the ports will be:

And the node will be repeated three times for:

Some nodes are actually designed to process lists of input data. This behavior will be identified by the node itself.

These nodes will repeat only once and this one run will absorb the entire data, regardless if it is a list of values or a single value.

Note: It is not necessary that these nodes to output a list. They might produce a single value, or a list of values. This depends on the behavior of the specific node.

Here is an example of summing node, that will add the input values and output the result as a single value: 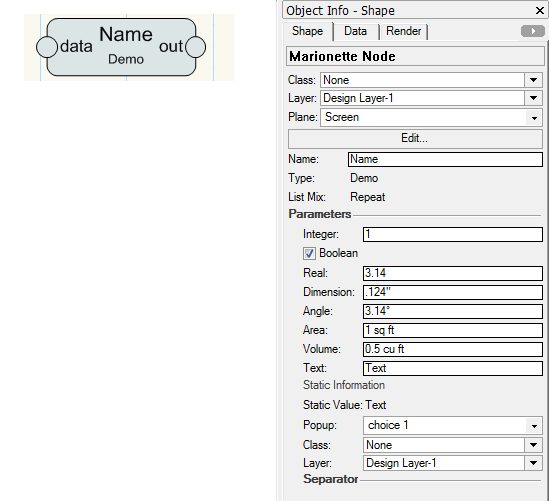 When executing the marionette network of nodes, Vectorworks will traverse all the nodes, and the connections between them, and build up a composite Python script from the code of each node. Then Vectorworks will execute that script.

The code for each node can be accessed through the 'Edit...' button on the node object info palette - shape pane.

Implementing a node requires writing a python script that defines the input and output ports, as well as the code that runs when the node is processed as a part of a network.