VectorScript provides a powerful tool to assist in solving problems that may occur while developing scripts. This tool, known as a source‐level debugger, controls the execution so that the internal operations of the script can be observed while the script is running. Using the debugger, it becomes possible to locate and solve problems by moving through the script line by line to view the associated data, variables, and flow of script execution.

The VectorScript debugger is activated by using the {$DEBUG} compiler directive. This compiler directive, which can be placed anywhere within a script, instructs the compiler to activate and display the debugger window when the script is executed. For example,

This launches the VectorScript debugger and displays the window as shown: 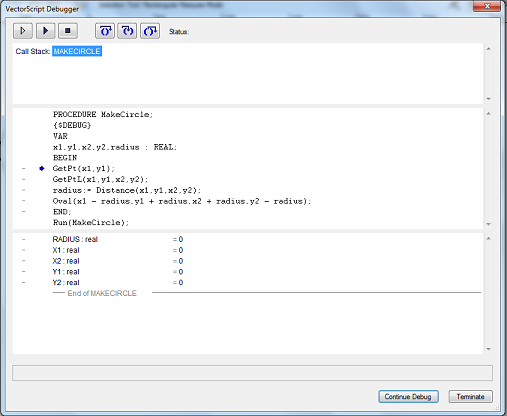 The VectorScript debugger allows a script to be executed in a line‐by‐line fashion, also known as ʺsteppingʺ through the source code. The debugger performs this task beginning at the first line of the script and continuing through each line until the end of the script is reached.

When the debugger is launched, storage for variables and constants is defined and script execution is paused at the first line of code in the script body. The debugger window is then displayed, providing a wide array of information on the script and the current state of execution. 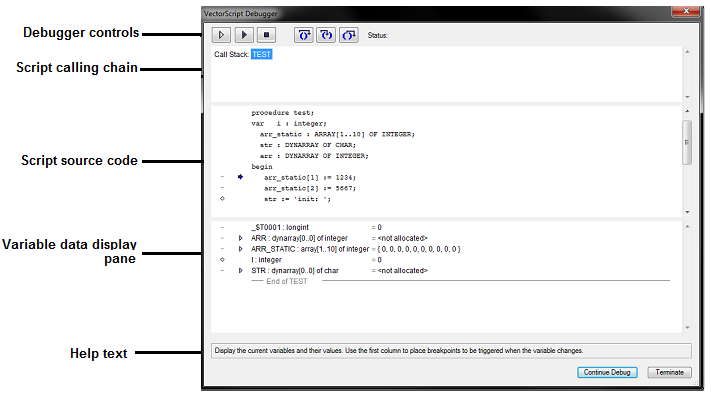 The debugger window contains controls for managing script execution, as well as several areas for displaying various data about the script and the state of execution.

The debugger controls allow the execution of the script to be controlled during the debugging process. Script execution can be started, stopped, paused, or advanced one line at a time.

The message area displays information about the script. These messages may include prompts for user interaction with the script, script status information, or errors encountered in script execution.

See VS:The_VectorScript_Debugger#Controlling Execution for details on controlling script execution in the debugger.

The script source code pane displays the source code of the script being debugged. The current location of execution in the script is indicated by the small blue arrow (

)on the left‐hand side of the pane. This arrow indicates the line of code that is about to be executed.

The variable data display pane displays the current values stored in variables, arrays, and structures declared in the script. The display is updated as execution proceeds, so that values can be continuously watched for changes during execution.

Arrays, elements, and structure members may be displayed by clicking on the disclosure triangle (

) that appears next to the item.

To run the rest of the script without debugging, click the Run button.

Continue the Execution of a Script

To continue the execution of the script until the script finishes or until the next break point, click the Continue Debug button.

Running scripts is primarily used in conjunction with setting a breakpoint in the debugger. For details on setting and using breakpoints, see VS:The_VectorScript_Debugger#Using Breakpoints.

Stepping Through a Single Line of a Script

To execute a single statement in the script, click the Step Over button.

The Step Over button advances script execution by a single statement and refreshes the data display pane of the debugger. The script position indicator advances to indicate the new location of script execution. If the statement which is stepped through is a user defined subroutine, all the code within the subroutine is executed.

When stepping through a statement containing a user‐interactive function call (such as GetPt() or GetLine()), the debugger dialog will be hidden and again will be shown after the function is executed.

Stepping into a Subroutine

To advance execution into a user defined subroutine, click the Step Into button.

The Step Into button performs a Step Over action with all other statements.

Stepping Out of a Subroutine

To advance execution from the current script location in a subroutine to the next statement in the calling function, click the Step Out button.

When stepping out of a subroutine, all statements which follow the current script location will be executed, and script execution will advance to the next statement in the calling routine.

To terminate execution of a script, click the Terminate button.

Breakpoints are often used in order to run scripts and stop them just prior to a statement or statements that are to be debugged. Once the script has stopped at a breakpoint, it may be stepped through manually or by using the auto‐step feature.

To set a breakpoint in the debugger, click the dash in the narrow column on the left side of the script source code pane. The new break point will be indicated by a small diamond (

) at the break location.

Once a breakpoint has been set, the script can be executed using the Continue Debug button. Script execution will pause when the breakpoint is reached, as indicated by a highlighted breakpoint and execution pointer arrow. The message pane of the debugger will also indicate that a break point has been reached. 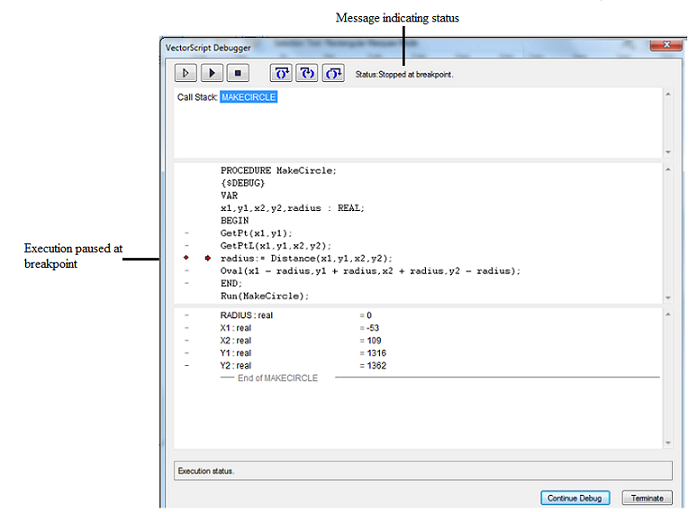 To continue execution of the rest of the script without debugging, click the Run button.

To continue execution using the VectorScript Debugger, click either the Continue Debug or Step Over/Into/Out buttons.

Breakpoints which have been placed in a looping statement will cause the script to stop each time the breakpoint is encountered. When used in conjunction with the Continue Debug button, such breakpoints can be used to observe conditions occurring within a loop during execution.

Care should be exercised when placing breakpoints within branching statements such as IF..THEN or CASE statements. If the breakpoint is in a branch outside the path of execution, the script will continue to execute.

To clear a breakpoint in the debugger, click the diamond indicating the breakpoint location while script execution is stopped or paused. The breakpoint is removed from the script.

Viewing Data in the Debugger 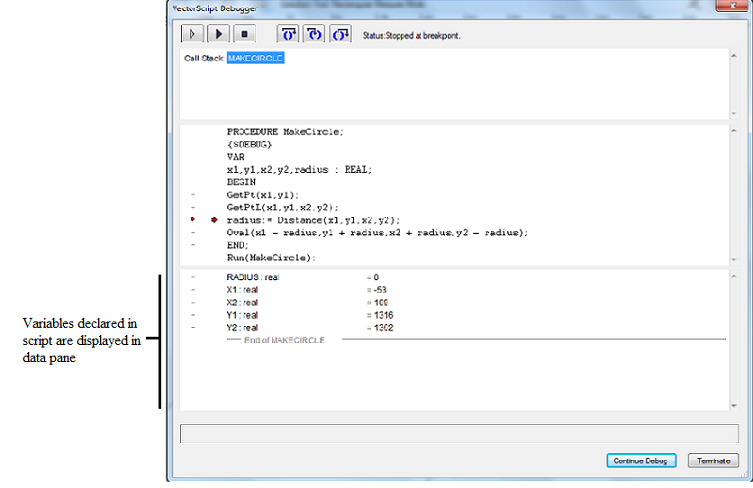 Vectors, array elements, and structure members can also be observed in the data display pane during script execution. Items containing more than one storage location are shown with a disclosure triangle ( 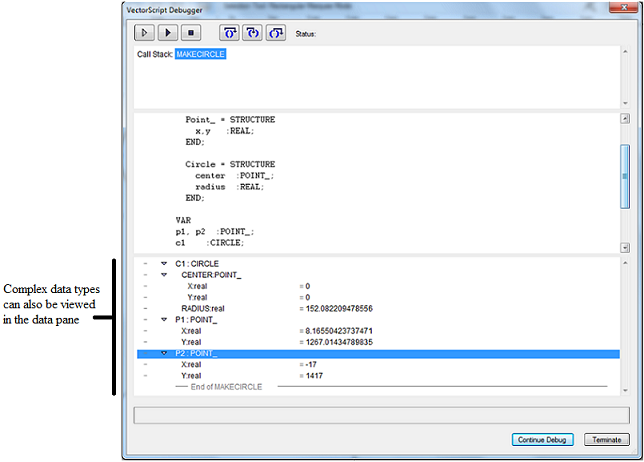 To edit the value of any variable data, click on the value. It would provide an extra dialog with an edit field to edit the corresponding value. 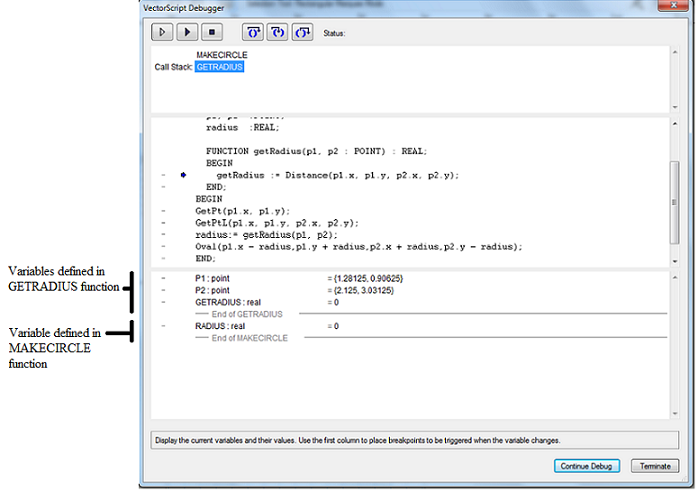