The mode bar is the space on top of the document where VectorWorks shows tool specific User Interface widgets as well as a line of help text.

VectorWorks sends several events to allow the plug-in to define the Mode Bar and to respond to events from it:

During this kToolDoSetup event the user has to create the mode bar using the following functions:

And then to initialize the initial state of the mode bar.

Usually the plug-in stores the state on kToolDoSetDown and restores it using kToolDoSetup.

Usually the plug-in stores the state on kToolDoSetDown and restores it using kToolDoSetup.

This message is received when Mode Bar User Interface element is selected by the user.

The messages are as follows:

The User Interface groups are represented by ID which is the index of the element. Every group contain one element, except radio groups which have many elements in the group. 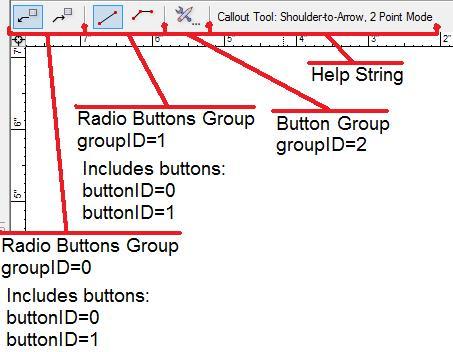